Block Together is shutting down.

Posted an update at https://t.co/m89L5vEKsu: I'm gradually shutting down Block Together over the next few months. New signups are turned off now, but existing blocklists will work through the end of July.

Block Together is a service which allows people to share block lists, so they can block trolls, harassers, and others en masse. The repo is still live on GitHub and hopefully will remain so.

I was just looking at my block list via Block Together, and I noticed something very strange. It’s something I knew already, but don’t think about often. While some of my blocks come from Block Together, most of them come from Twitter ads, and a big chunk of them are influencers I never heard of, or movie stars I have no strong opinion about.

Brands will pay a celebrity or influencer to promote their product/service via a tweet, and then pay Twitter to promote that tweet to people who’ve never heard of the influencer, and/or people who just don’t care about them. The first step in that process makes perfect sense, but the second step is weird as hell.

I think it doesn’t happen as much as it used to, probably because the influencers figured out that it’s a bad deal for them. You get some small cash payment upfront, and then a bunch of people ban you for life.

Austin Evans makes tech videos. Some brand paid him to make some video about some product I didn’t care about. I saw it, got annoyed, and have had him blocked ever since. I don’t have anything against him now. It was a reflex, ten years ago. I had to look him up just now in an Incognito window just to figure out who he was. For all I know, his videos are great.

Here’s my best guess. My guess is that the analytics Twitter provides for promoted tweets are a lot better than the analytics that it provides by default. I don’t know for sure, and I haven’t been able to track down the answer, but it’s the only theory I have which can explain this self-defeating strategy. If these marketing teams are indeed re-centering their actions around something totally useless because it’s the easiest thing to measure (or were doing so), that’s one of the best-known and commonest mistakes in business. If I’m correct that it doesn’t happen as much as it used to, then probably Twitter upgraded its post analytics and made them available to everyone. This Twitter blog post from 2014 supports that theory. 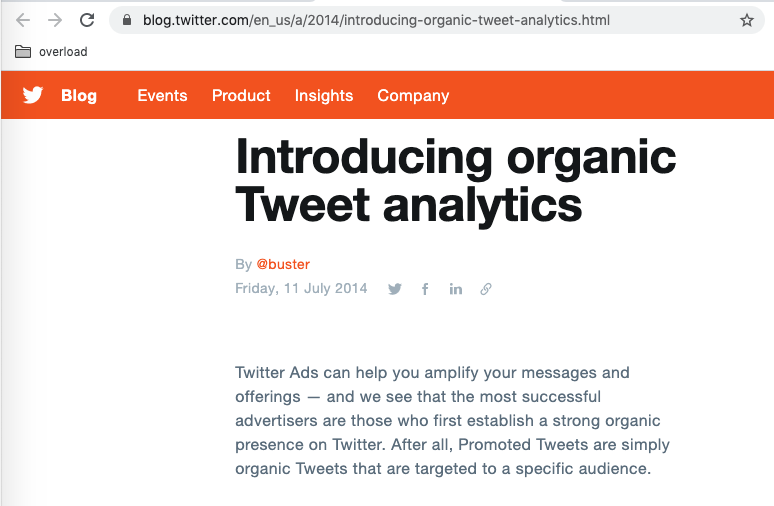 Hell, maybe this fix stopped the problem years ago. I don’t know. But I do know how it’s broken.

I think the problem here, really, is that there’s a new form of capitalism, and people miss the point if/when they base their understandings on old models. I call this new model vector capitalism. I got the term from a review of McKenzie Wark’s book Capital Is Dead, although I have to admit I haven’t read the book yet. But the idea is easy: in vector capitalism, profit depends on the ability to direct traffic on the internet.

There are many analogs in the physical world. Shopping malls seek to direct traffic past as many stores as possible. Casinos surround their customers with flashing lights to keep them gambling. Grocery stores use architecture and shelving layout to encourage shoppers to buy high-margin items. Some of these examples are pretty manipulative, and vector capitalism can be very evil in some cases — conspiracy theorists who monetize disinformation and paranoia on YouTube are a dark example of vector capitalism — but it doesn’t have to be evil. It’s not much different from buying up prime commercial real estate, except that you can get started with a much smaller budget, and you benefit from people moving through virtual spaces rather than physical ones.

What I like about vector capitalism as a concept is that it covers a wide range of new phenomena. Kim Kardashian is a vector capitalist; she has a big audience, which means she can direct a lot of traffic, and she leverages that traffic in many different ways. She has a mobile game, and she, like all of her siblings — who her mother seems to operate as a portfolio of media properties — will sometimes do (blatantly insincere) Instagram shoutouts for various products, probably in exchange for profit sharing and/or cash payments. Vector capitalism also covers smaller projects like Egghead.io or Destroy All Software. Fundamentally, any web developer with a blog who sells an ebook through Gumroad is leveraging traffic to sell stuff.

You could also just call it attention capitalism, since these examples revolve around social media. But Amazon is also a vector capitalist. Amazon sells stuff through its platform, but it also allows other sellers to use its platform and its fulfillment systems to sell their own stuff. (This blog post itself is in a very loose and unofficial sense “sponsored” by Amazon, since it includes affiliate links for books on Amazon.) GitHub is about vector capital also; when you can casually track commits per day for hundreds of millions of developers, and your parent company owns LinkedIn, the value of your company doesn’t come from its monthly subscription fees. Commits are a form of traffic, too, and counting them can be very valuable.

“Attention capitalism” is also inadequate to explain dropshipping, an industry where owning goods you can sell, and keeping them in some warehouse in China, is less profitable than owning traffic to a Shopify web store which sells those goods, and still less profitable than owning the YouTube traffic of people who are trying to figure out how to get those Shopify profits for themselves. The fact that capitalism is named after capital implies that owning the goods would be the most valuable position in this arrangement — the goods are capital, after all — but it’s the least valuable position.

Dropshipping YouTubers typically sell online courses, and online courses have near-zero margins, so the most profitable position in that chain is also the most visible: teaching others how the previous steps work. People see that and reflexively describe dropshipping as a pyramid scheme, but that’s not strictly accurate. It’s more like a weird hybrid of commerce and performance art. Call it performative commerce: if you get a good screenshot of its earnings, a Shopify store which makes money for only one month might still draw money-generating attention for years to come.

In vector capitalism, prosperity hinges on owning a vector, or a motion of people in a particular direction. Amazon controls a lot of shopping traffic, so they own the vector. Kardashian can generate a lot of traffic too, although she doesn’t necessarily control it. People don’t necessarily go to her Instagram account with shopping intent, but she can guarantee that some percentage of her Instagram followers will see an ad, if she wants them to. Both Amazon and Kardashian leverage a platform, but owning the platform is optional. Shopify dropshippers leverage Shopify, Instagram, Oberlo, and AliExpress, but it’s the movement of attention from Instagram to Shopify — and the movement of purchasing information from Shopify, through Oberlo, to AliExpress — that makes them rich.

It’s important to understand that this is literally true. One troll tactic is to put links to harassing videos in the replies to their victim’s tweet. A person who sees this might click the link, view the video, and therefore see a YouTube ad, thus making the trolling a profitable activity. Trolls do operate this way, intentionally, in many cases. Block Together, by categorically denying attention to various trolls, impairs the effectiveness of that strategy.

So you could call Block Together vector anti-capitalism, or vector collectivism, but I think the best term is vector collective action. Or, for simplicity, vector protest.

If you haven’t guessed, I have a lot of ambivalence here. I’ve been an entrepreneur in the past and I expect to be one again, but I think capitalism in general is a bit of a shitshow these days. So while there are things I like about vector capitalism, I don’t fully trust it, and I see a lot of value in vector protest.